Carpet moths are especially prolific at this time of year due to the warm weather. The average householder has no idea about this type of moth, often believing it is the adult moths of other bigger and more brightly coloured species that are munching on their carpets and fabrics. As the carpet moth is so small you may not even realise you have a problem until you notice the worn patches on your carpet. Here is some information which may be of interest.

If you have a carpet made from natural fibres, such as wool, and have noticed small balding patches in the corners and at the edges, you may have an infestation of carpet moths. 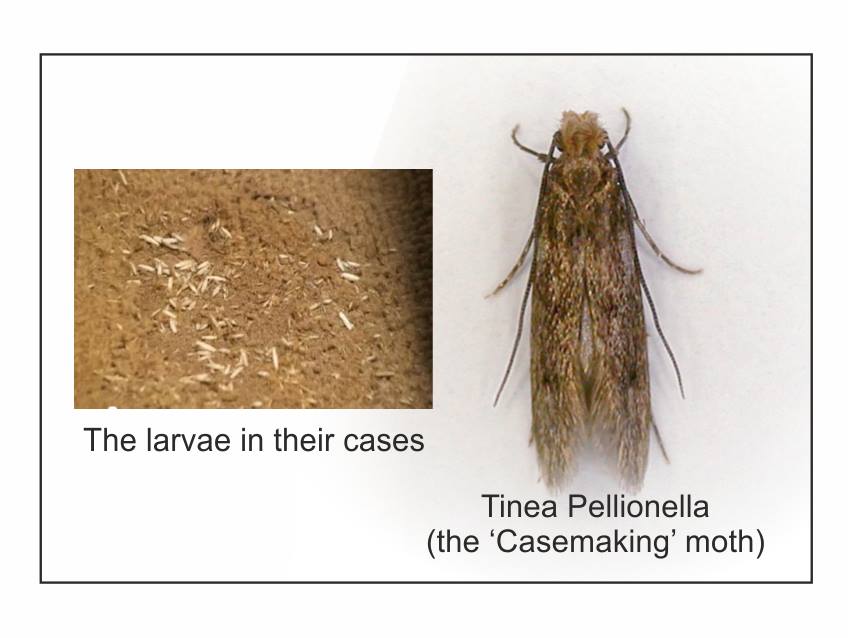 Carpet moths are very small (under a centimetre long), a dull brown colour, and will often scurry around rather than using their wings. They originally live out in the wild, usually in the nests of birds and other animals. They feed on the protein fibres which are naturally discarded by their hosts and choose to live in animal habitats for this reason. They also benefit from the warmth of the animal and, unlike other species of moth, prefer dark rather than light places.

To end up nesting in a carpet the moths would need to find a way in to the home, and it is not uncommon for them to enter attached to an article of clothing or other item.

Once inside a moth will look for a hiding place where it is safe to lay its eggs. As it prefers dark areas, the most common places for infestation are around skirting boards and under cupboards, book cases and other furniture.

The only interest in carpeting for a carpet moth is the protein value of natural fibres. A room containing twenty square metres of wool carpet would be heaven for them, providing a plentiful land to reproduce and spread for generations to come.

A common misconception is that it’s the adult moths that cause the damage to a carpet, when actually it’s the larvae. The adults lay eggs on products that the larvae will consume. As soon as the eggs hatch the larvae will start feeding on the carpet fibres. This stage usually lasts between 68 to 87 days. The larvae of Tinea Pellionella (the ‘Casemaking’ moth) spin protective cases around themselves, leaving the ends open so that they can use their jaws and legs. These cases (which resemble grains of rice) are dragged around with the larvae as they move and eventually become the cocoon in which they pupate and develop into adult moths.

Carpet moths like humid conditions, so at this time of year they are especially prolific. However, since the advent of central heating, moths now breed all year round.

HOW TO DEAL WITH AN INFESTATION

This is a problem that needs attention, because it will only continue to get worse. Also, did you know that the very same larvae that are eating your carpets will also quite happily munch away on your favourite items of clothing if they are made from natural fibres? Yes, I know, it’s a scary thought!

When it comes to getting rid of these creatures, however, controversy ensues. Different websites will site everything from placing an infested rug in the sun for a few hours to rolling them up and placing them in a cavernous freezer. But my advice to you is…. simply…. don’t waste your time!

A carpet suffering from moth infestation will require professional attention if it is to be dealt with successfully. If you suspect you have an infestation, call me and I will be able to help and advise you.